​Creosote is formed from the distillation of tarry, carbon compounds and pyrolysis of organic - plant based materials (firewood).  Soot and tar are other common names for creosote and some other "interesting" names include; "creo-soot", creosol, creolsol, black chimney dust.  There are many types and ways creosote is formed including as a by-product of burning wood.

First degree creosote is mostly composed of sooty carbon deposits - "creo-soot". Stage 1 creosote can be easily removed during a chimney sweep service.  This type of creosote is a natural by-product of wood burning when there is adequate combustion air, the flue system is warm and is venting properly and wood with a low moisture content is being burned. If you have this type of creosote in your system and not type 2 or 3, you may be operating your wood burning appliance in a suitable manner.

Fluffy puffed creosote that looks like honeycombs is associated with a chimney fire. This type of creosote is produced during an intense heat event such as a chimney fire. Other types of creosote are rapidly expanding forming the puffed, honeycomb like appearance. If you have had a chimney fire, we recommend having the solid fuel burning system inspected within the scope of a level 2 inspection.

​When the creosote deposits inside the chimney are 3mm or greater, the chimney should be swept.  Under normal conditions, the average solid fuel system will accumulate 3mm of creosote after approximately 50 or 60 burns.

​Certified factory built solid fuel appliances such as a wood burning stove or factory built fireplace require maintenance as outlined by the manufacturer.  Many wood burning appliance manufacturers require certain components to be evaluated and serviced on a regular basis (more than the chimney sweeping requirements) and require any unsuitable conditions to be rectified prior to use.

​How to Remove Glazed Creosote

​Glazed creosote is very difficult to remove as it solidifies and cements itself to the interior venting and wood burning appliance components.
In most cases an aggressive chemical treatment repair is needed to convert the glaze into a stage of creosote that can be removed. Heavy or extreme glazed creosote deposits may require several deglazing treatments or may not be fully removable.

Canadian Chimney offers treatment service to try and deglaze the third degree creosote deposits. We most often use a product called cre-way in combination of an aggressive power sweeping tool and heat (product manufacturers instructions).
We start by scoring the interior surfaces of the chimney and venting components. We then apply the deglazing product with a compressed air spraying tool. After the product has been applied, heat should be applied to the interior of the solid fuel burning system for 7 to 10 days. After the heat application, the system should be swept and evaluated. If deposits remain, these steps should be repeated until the glazed creosote deposits have been removed.
The deglazing product helps neutralise the acidity of the glaze deposits and therefore will help prevent premature degradation of system components (corrosion).  The product is also a fire retardant and will reduce the probability of the creosote igniting - chimney fire. 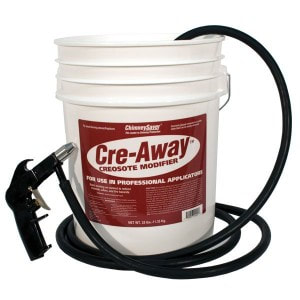